I would like to make it clear that these were not birthday cupcakes. Absolutely not. Miss Jennifer didn’t want to celebrate her birthday, and far be it from me to try to change her mind. No, no, I just really like baking and knocked these up. In fact I’d completely forgotten that it had been her birthday at all. It was just a coincidence. It was also a coincidence that I’d bought her a present, and that the other girls had bought her presents too…

I think you probably see what I’m doing here. I couldn’t let it lie – there had to be cake. In our defence, we sang ‘happy cakeday’ instead of ‘happy birthday’, which was really our only concession to her not wanting to celebrate. The bottom line is that friends don’t let friends not eat celebrate on (or at least around) their birthday. In the end I don’t think Miss Jennifer minded that much.

These cakes draw on inspiration from three places. They started out as being filled cupcakes, as inspired by Anne’s Cupcakes Violet Beauregarde over at I Heart Cupcakes. I knew that mine wouldn’t look as bright and pretty as Anne’s, as I was using my new favourite chocolate cake recipe – Devil’s Food Cake from Cake in the Country, my second inspiration – and I wasn’t using butter icing that I could swirl up on top into that quintessential cupcake style, but the idea of filling a delicious cake with something else delicious? You bet I wanted a piece of that action. I neglected to take a photo of the inside of the cakes, which is a shame, so you’ll have to use your imagination there.

That was the extent of the initial idea – devils food cupcakes, filled and iced with dark chocolate and raspberry ganache. Once I’d made the cake batter, though, I found that I had some left over once the 12 cupcake cases were filled. I thought I’d make some tiny cakes, which I sometimes like to do with leftover cake mix because 1) tiny cakes are adorable and 2) lots of tiny cakes go further than a few normal sized cupcakes. As I filled the tiny cases with the devils food cake mix, I remembered a photo I’d seen on Must Have Cute of a cupcake with, wait for it… ANOTHER CUPCAKE ON TOP OF IT! As it turns out, the tiny cupcake on top wasn’t really a cake, but the overall effect is still the same. You can check it out here at That’s Noice! So I decided I’d do a take on this, but less awesome because I’d be using just flat icing. Less awesome, that is, until my new piping bag came in to play. That’s right, I finally got to use the flower piping nozzle, and it was good. 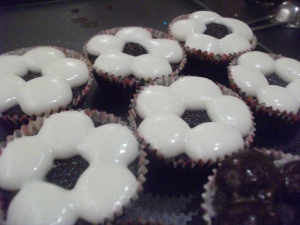 Sorry about the difference in picture quality there – it was night time, and my kitchen is oddly-lit, so it’s hard to get the lighting right.

Once the cupcakes (big and small) were baked, I added yet another level by realising that I had some marshmallow-cream cheese icing left in the freezer from making Red Nose whoopie pies. I decided to fill half of the cakes with this, and half with the wonderfully easy to make ganache. This is what it’s like in my head, you know; lots of options, branching out endlessly, making it hard to choose just one thing to bake. It’s no wonder I bake so often, with the ideas and permutations of ideas chasing each other around in there. If I didn’t try at least some of them I fear my head would explode, or at the very least there’d be an ideas leak and the whole area would have to be quarantined.

OK, let’s go through the cupcakes step by step now, so we can have some nice pictures. 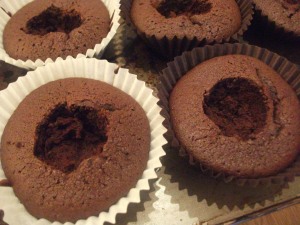 Once the cupcakes are baked, use a small knife to cut a circle in the top, then lift out that piece of cake. Use your fingers to hollow out a little cake cave. Reserve the top circle to put back on again, but the bits and pieces you took out by hand can be safely consumed at this stage.

Use a spoon or a piping bag to fill the cupcakes with your frosting of choice. Leave enough room at the top to put the removed cake back in, like a lid.

Once the ‘lids’ are back on the cakes, use a spoon (or piping bag to) top the cake with the icing or ganache you’re using. There’s no reason that you couldn’t have a different filling and icing, though I didn’t want to complicate matters any further than they were already going to be.

Place a tiny cupcake on top of each normal sized cupcake. These were already iced, I didn’t fancy trying to ice them as they sat at a precarious angle. As you can see, I put the marshmallow-iced tiny cupcakes on the ganache full-sized ones, and vice versa, so that everyone got to try both kinds. The contrast in colour was good, too.

The only recipe I really need to add is the raspberry ganache (links to the devils food cake and marshmallow cream cheese frosting are up there somewhere), which is made with raspberry liqueur. You can substitute in any kind of booze you like to make different kinds of ganache. It’s so easy to do but it tastes really Proper. What’s not Proper is this recipe, it’s more of a guideline. All you have to do is mix equal amounts melted chocolate and cream (single or double) together, then add liqueur to taste. For example, mix 2 tbsp melted dark chocolate and 2 tbsp double cream, then add raspberry liqueur a capful at a time until you have the right flavour. It depends how boozy you want it to be. What you can also do is slightly reduce the amount of cream to give a thicker ganache that will set hard overnight – say 2 tbsp chocolate to 1 3/4 tbsp cream, plus liqueur. The best plan is always to have more of all the ingredients on standby, that way you can always add more chocolate or cream if the consistency isn’t right.Remember that it will thicken as it cools – if you’re not sure, you can put it in the fridge for a few minutes to see how it looks.

These cupcakes went down an absolute storm. Both flavours were good, but I have to express a preference for the raspberry ganache ones – they were so indulgent and rich, what’s not to love? 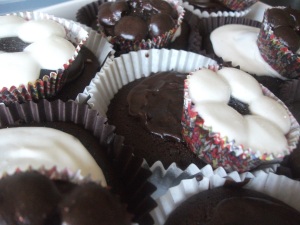 Seasoning while rocking out since 1983. END_OF_DOCUMENT_TOKEN_TO_BE_REPLACED
This entry was posted on Wednesday, August 10th, 2011 at 1:00 PM and tagged with baking, chocolate cake, cupcakes, davils food cake, flowers and posted in Cake, Other people's recipes. You can follow any responses to this entry through the RSS 2.0 feed.
« Cheese, Chutney and Oatcakes
Free Tabasco! »

What do you reckon? Cancel reply