If you have a bookmark for Rock Salt, the new URL to use will be https://rocksaltuk.wordpress.com

You can change it any time, and from the start of next year the current URL will no longer work.

I may not be blogging any more, but I can’t quite bring myself to get rid of the blog altogether!

I’ll also be building a new, dedicated site for Foodie Penpals – more on that when it’s ready.

This month, my parcel came from Margaud in France. I didn’t ask for anything specific, as usual, instead letting her know the few things I don’t like, and asking for things that are ready to eat, rather than ingredients. Margaud sent me a beautiful box – let’s take a look: 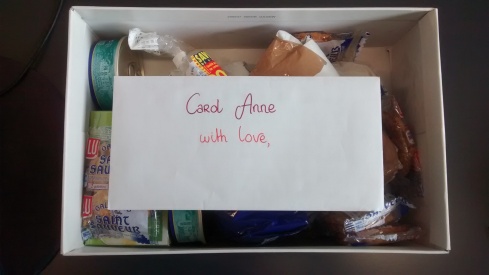 I think the letter might be my favourite item in this parcel! I know it sounds strange, but it was written with such care, and in such cheerful colours. I really loved it, and read it over with care before I got opening. Once I was ready, I proceeded to check out everything in the box – and there was a lot packed in there.

Pasta from Alsace. Of course, I always think of pasta as Italian, but it turns out that I’m missing out on this specific kind of pasta, made with seven eggs per kilo of durham wheat semolina. I look forward to trying it with a simple sauce, to see if I can tell the difference between this and the pasta I’m used to.

Galettes Bretonnes – a sweet but light biscuit from Brittany. These are crisp and thin, a lovely snack for tea time – I bet they’d be excellent with Nutella on them. Mind you, so are many things…

These little parcels hold delicate, sweet cakes – one of them was smashed to smithereens by the post, so of course I had to immediately eat that one… They’re made with wine and aniseed, and again are a perfect tea-time treat. Not too much, but not too little.

Speaking of tea, I got some new teabags! This is spot on, I’ve been meaning to replenish my stock of tea bags, so the timing couldn’t be better. Ginger and lime green tea sounds like a good pick-me-up after lunch (does anyone else eel the need to sleep for a week after lunch?). Can’t wait to try them.

Even the name of this fruity snack is gorgeous – BuddyFruits! Margaud says this is a favourite snack of her’s for that dreaded mid-afternoon slump, though I can see me having it as a breakfast treat one day. 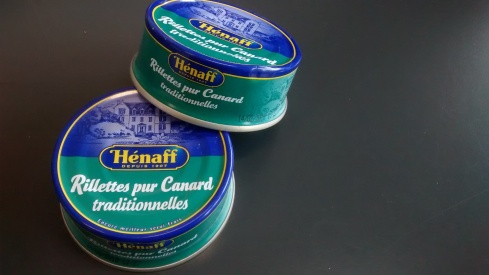 I’ve never tried rillettes, but I already know I’m going to love it. Anything in the pate family is a friend of mine. This will be a lovely lunch for me one day, with some crackers or oatcakes, or maybe a fresh slice or two of bread, and maybe a dorp of fresh salad. I’m looking forward to it already.

This packet will make a lovely and, crucially, easy butter sauce for cod. All I have to do is parcel it all up and pop it in the oven. Add some mashed spuds, or a baked potato, and a drop of veg, and I have a winning meal. I need more of these easy meal solutions in my life, I spend far too much time trying to make things from scratch but finding I don’t have time and eating cereal for dinner.

The jewel in the crown of my parcel: Porto Cruz pink port. Another new item for me, and one I’m going to keep chilled and ready for an emergency. You’d be surprised how often there are booze emergencies in my house. Apparently I can serv this over ice, or in a cocktail. I think I need to do some more research before I decide.

Margaud, merci beaucoup pour le merveilleux cadeau. J’aime tout dans la boîte! I’m really looking forward to tasting everything, and I love that so much of it is in small portions so I don’t really need to share…

If you’d like to know more about Foodie Penpals in the UK and Europe, you can check out the drop down menu at the top, or click here. If you are in the US or Canada, find out more on The Lean Green Bean. 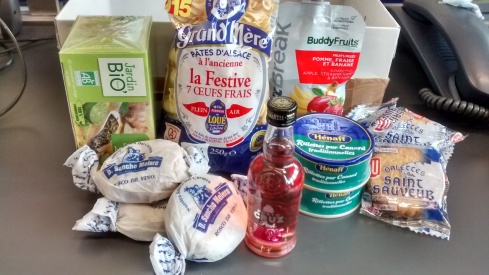 This is my current favourite loaf, bar none. It’s easy to make – though the ‘quick’ part of the title definitely needs to be taken in context – but the end result is bread that’s full of flavour and texture and, most importantly, those air-pockets that fill up so delightfully with butter, jam, soup, or whatever else you put the slice on or in. It’s also so appealing to look at, beautifully rustic and craggy. And the smell! Well, that’s a given. 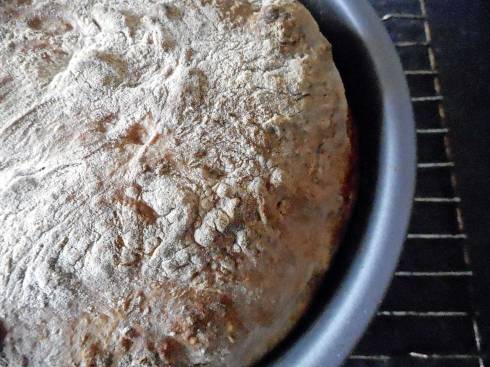 The recipe comes from the New York Times, and shortens the usual no-knead time from 12 hours to just 4. I’ve even cut the initial rising time back to three hours, on a warm day, and it’s still come out really well. Did I mention I love this recipe?

I have begun to diverge from the recipe a little over time, even though you’d think there wasn’t much room to stray from the simple path it lays out. I keep the ingredients as directed, and while I sometimes monkey with the initial rise time, I generally leave it for four hours – it takes so little time to mix those ingredients together that you can get it started quickly, then go about the next four hours of your day without giving it another thought.

Tip One: Be absolutely positive to mix the dry ingredients well before adding the water. Otherwise your yeast will clump together and you’ll have a devil of a time trying to mix it through the flour.

The dough will be shaggy, as the recipe states. For me, that means it looks like this:

It’s not a ball of dough, there are no smooth surfaces to be seen. It’s kind of lumpen and unlovely, if we’re honest. That doesn’t matter. Wrap it up tight, keep it cosy, and let the yeast do its work. It’s pretty much lumpen and unlovely all the way, until you take it out the oven at the end and marvel over its beauty. Kind of an ugly duckling situation…er… if that story ended with roast swan for dinner…

Tip two: That was a joke. Do not eat swans.

After it rises, it will be a little more swampy than before, and when you tip it out onto your well-oiled worktop, you’ll see tons of bubbles, like so:

This is good news. Try not to bash all the air out of the dough, since you’ve made the yeast work double time to create it in the first place. The dough now gets folded over a couple of times, to give it height. I usually go for a four-way fold – imagining the dough as a square, I lift and fold a section from the top and bottom, then from the left and right. I end up with a kind of swag-bag shape. The dough is sticky and joins up easily, to itself and also to your hands. 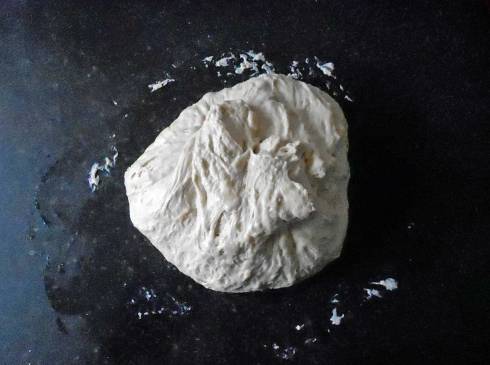 Tip Three: Coat your hands in oil or water to stop the dough from clinging to them. Make sure your surfaces are well oiled, too.

The bread relaxes for another half hour after you’ve folded it. It is a soft dough, and it won’t hold its shape over this time. You can stick an inverted bowl over the top – making sure to oil any of the bowl that will come into contact with the dough – to prevent it from spreading too much.

Put the oven on to heat in this half hour – it’s going up to 230C, so it needs some time to get there. Also put the baking dish or tin you’ll be using in there, so it’s piping hot before you put the dough in. This is an area where I differ from the recipe – I use a cake tin to bake the bread, instead of a proper dish with a lid. I leave it uncovered, and bake it for less time. It’s not the recommended method, but it works for me.

The moment when you move the risen dough into the baking tin is the worst part of the whole operation. It’s so soft and delicate that you feel sure you’re going to ruin it – or that you’ll never be able to get it off the counter and into the tin. Have courage – you can do it. 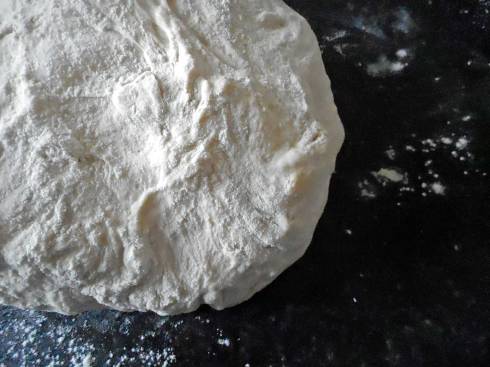 I sprinkle the surface with a little flour, which helps to stop more sticking and lets me shape the dough just a little, enough to make sure it’s the same size as the awaiting tin. I gently pat and turn it with my hands – the turning makes sure that it’s free of the counter. If it sticks, I get in there with a dough scraper and loosen it off. It’s only a matter of time before the moisture in the dough either soaks into the flour on the surface, or re-attaches to the counter, so you do have to move fast. Scoop it up and drop it into the tin, and give the tin a shoogle to even it out in there.

Tip Four: That baking tin is HOT so be careful. Drop the dough from a little way above the tin, so you don’t hit it with the back of your hands and end up with matching burn marks. People will not be sympathetic about those. They may even snigger.

I bake, uncovered as it is, for half an hour. With my oven, this is when the crust is golden and the loaf sounds hollow when I tap on the base. 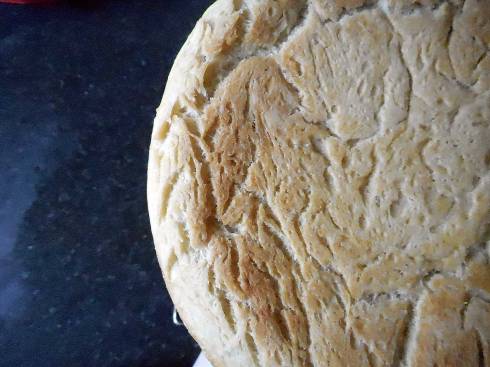 Put the loaf on a rack as soon as you can, to let any extra moisture out, and let it cool a little before slicing into it. It will be difficult to resist. Be strong.

Postscript: I just ate the slice of bread in that picture up there, and it was just so good. The bread is moist and chewy (the way I like it), and has a hint of sourdough flavour from the longer rise. Just a hint. A splash of sourdough starter might be the next way I change the recipe. I don’t know, though. It’s pretty darn perfect.